Community Action Projects are long term commitments to the neighborhoods where our school sites are based. These projects take place in the local community and seek to address an inequity that exists in the neighborhood. For example, in East Los Angeles, our students wanted to address the fact that their neighborhood lacked access to fresh, healthy produce. That trimester, teachers created a curriculum that gave students the opportunity to study and learn more about food deserts. At the end of the trimester, students worked with a local corner liquor store to add refrigeration units and stock them with fresh, locally grown fruits and vegetables. Below are several examples of the social justice advocacy work and community action projects that students at YouthBuild Charter School of California have initiated in their communities over the years.

Examples of Past Community Action Projects: 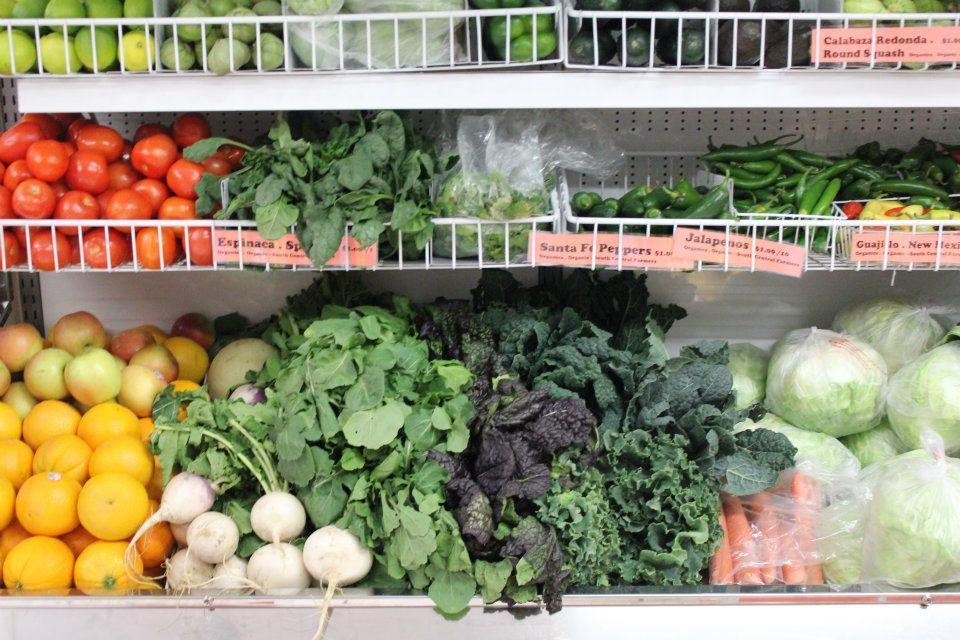 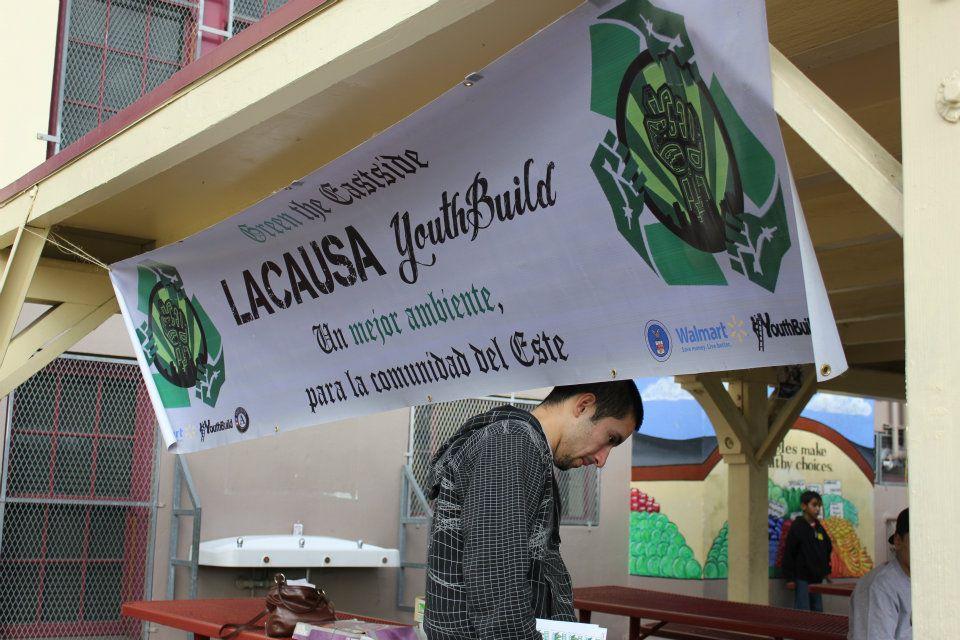 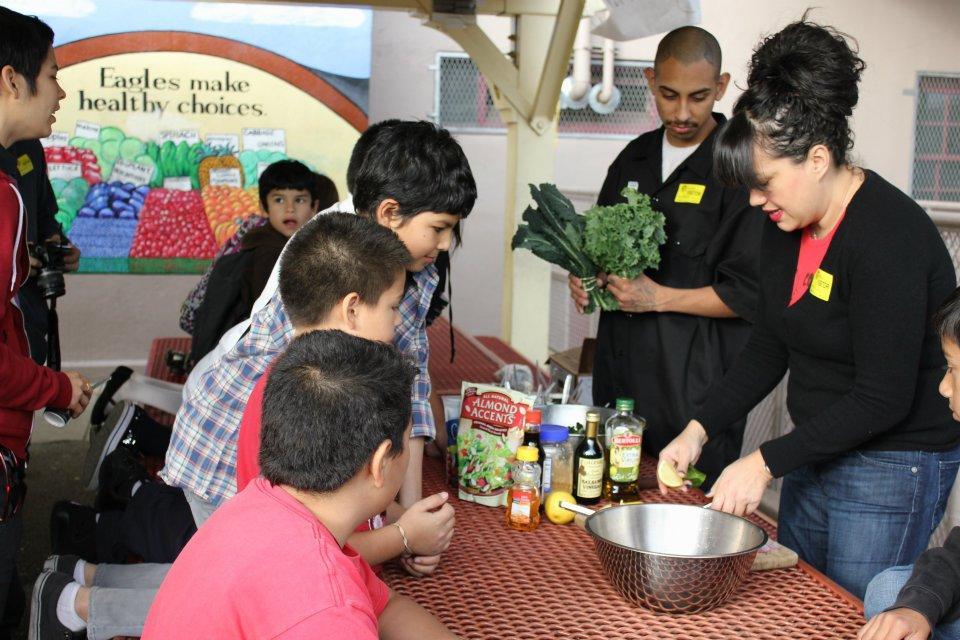 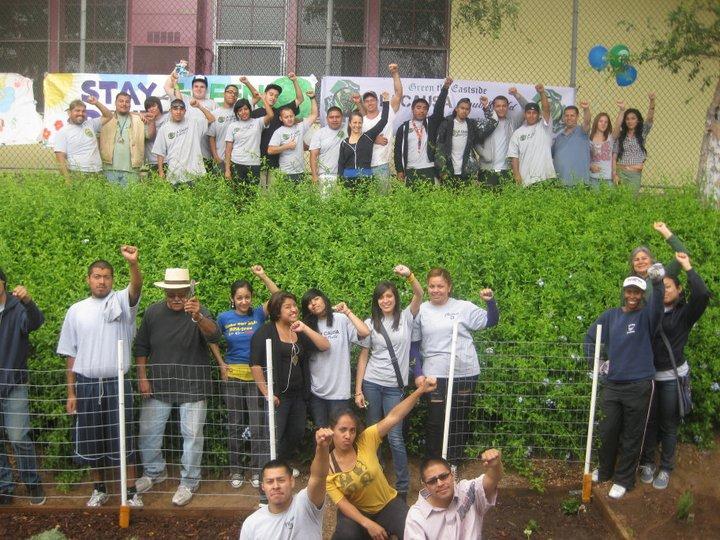 During the 2011-12 school year, students at LA CAUSA YouthBuild started a "Green the Eastside Initiative" to address the issue of food deserts in their community. Clockwise from the upper left: 1.) Students helped stock the shelves at Edith's Market, a local liquor store in East L.A., to add fresh, healthy food options in a neighborhood where there were none. Our teachers connected that experience to lesson plans on health, environmental sciences and the social causes of food deserts. 2.) A banner for a "Green the Eastside" event in East LA. 3.) Students pose at Humphrey's School Garden, where they planted and maintained the fruits and vegetables that stock the shelves at Edith's Market. 4.) Green the Eastside volunteers show children in the community how to prepare a healthy meal using the fresh produce. You can learn more about their efforts on the website they created. 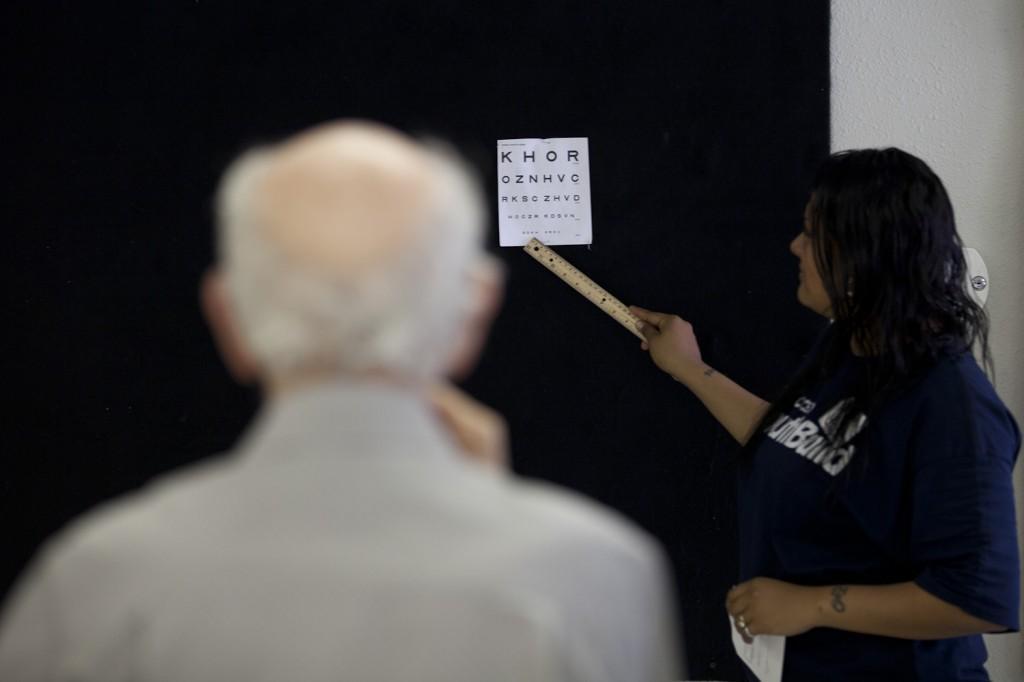 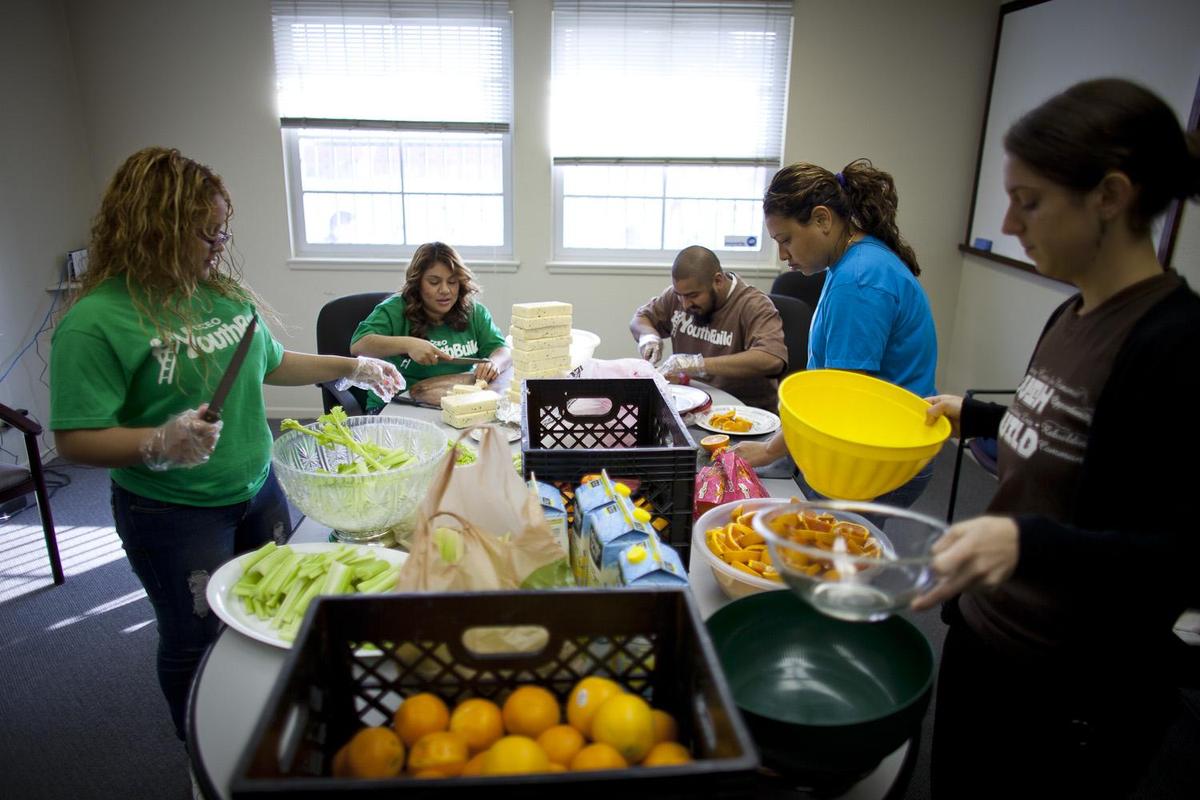 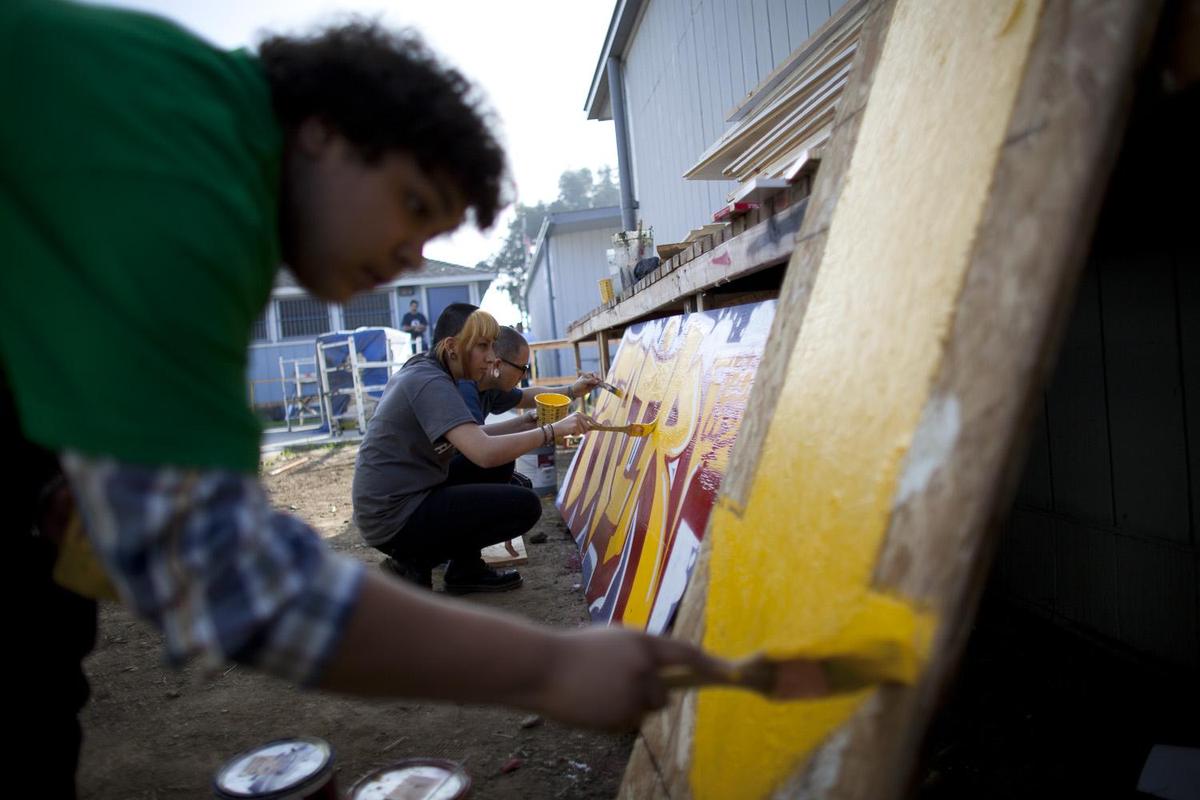 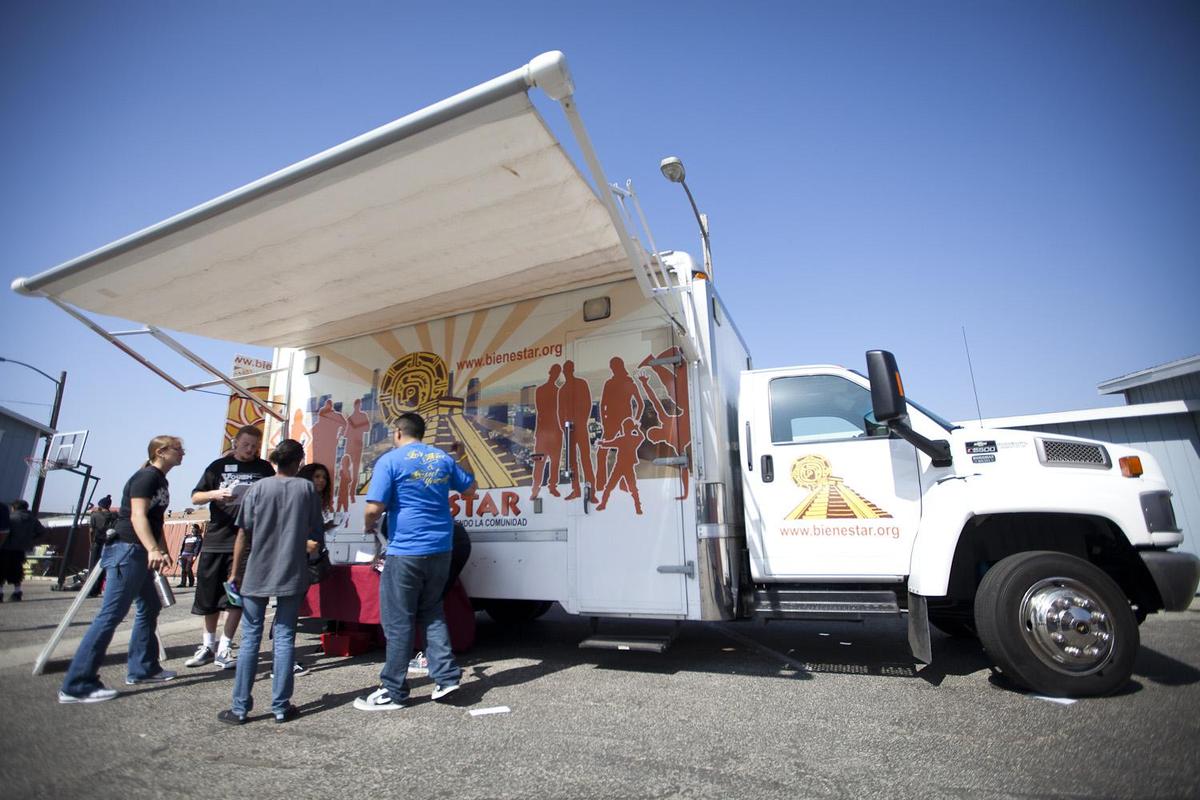 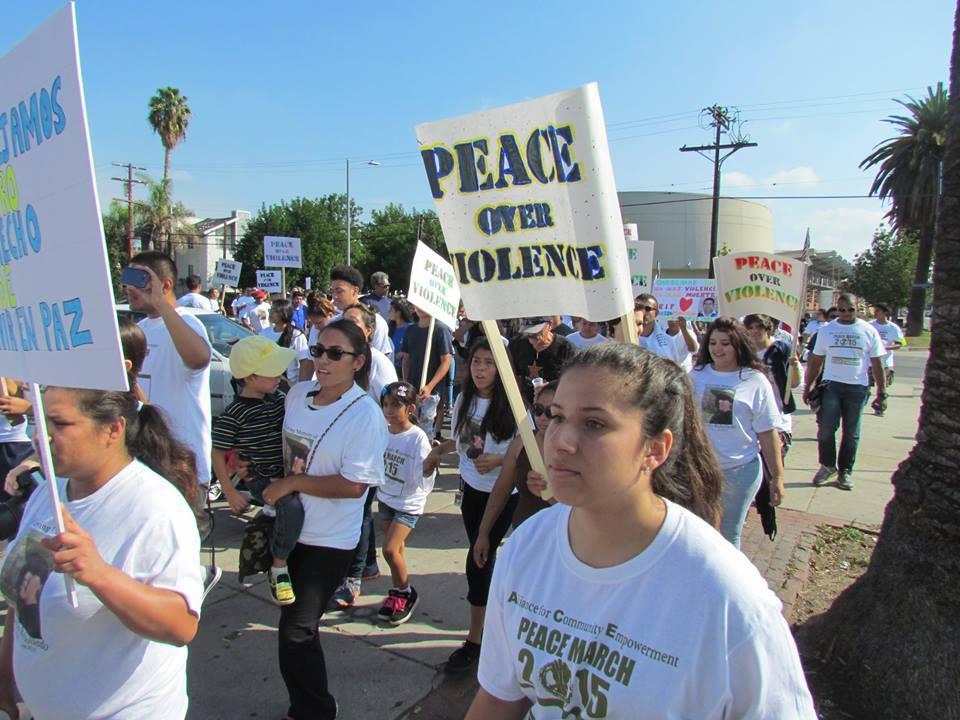 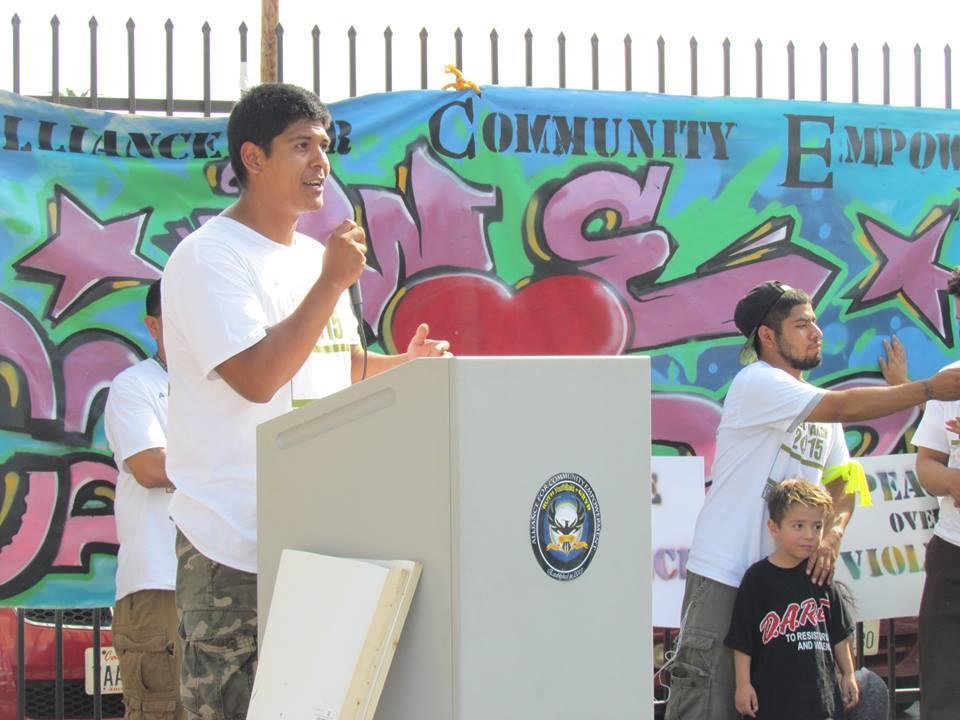 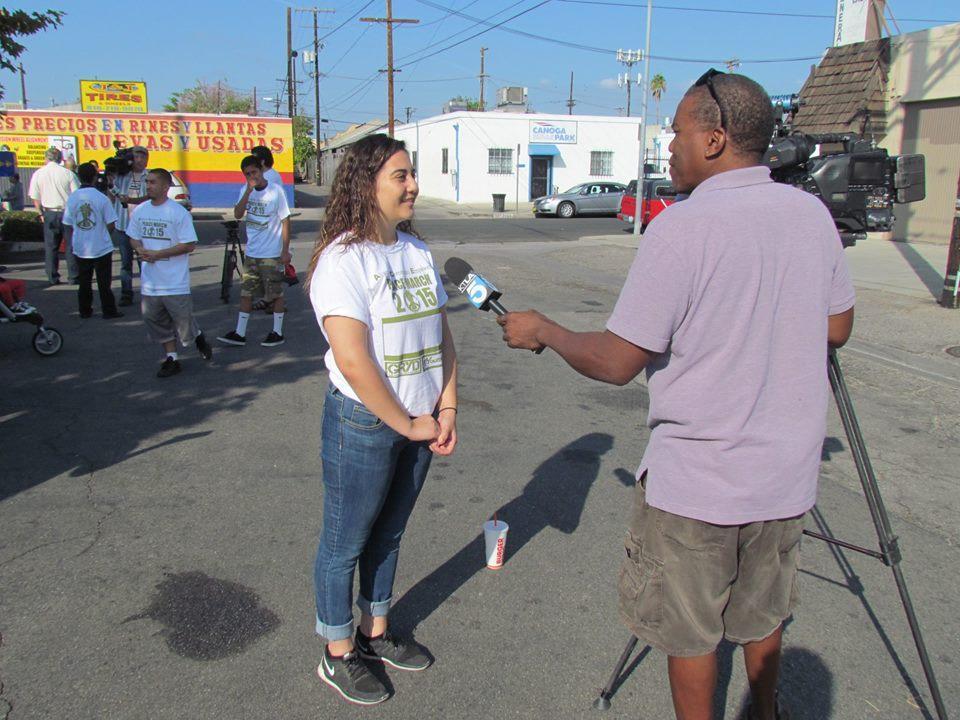 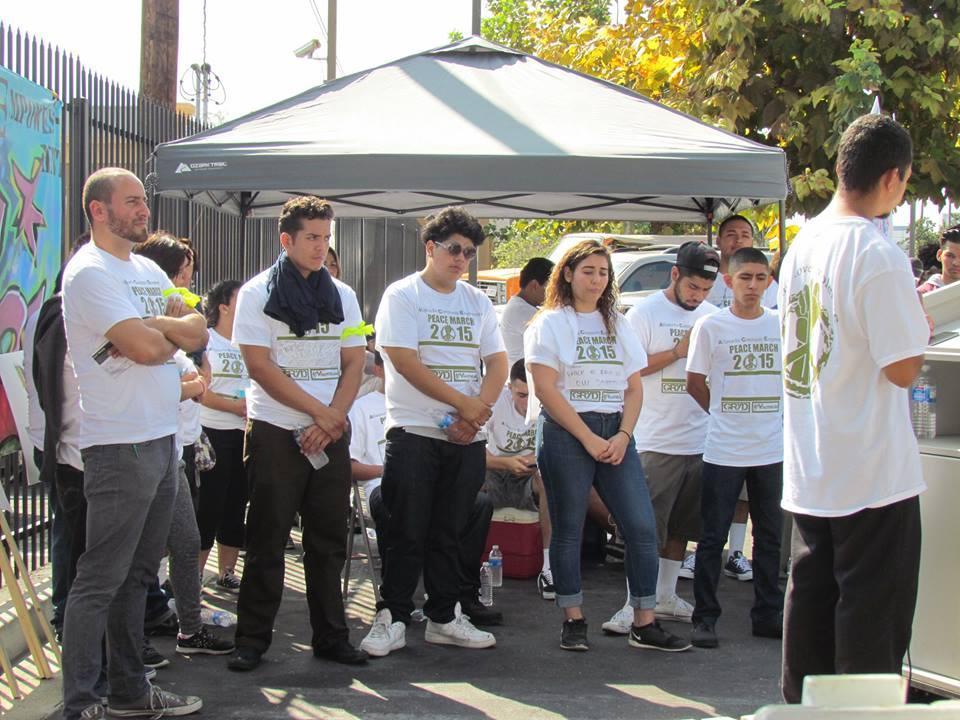 In October of 2015, a gang-related shooting took place just three minutes from our school site in Canoga Park, leaving an innocent bystander dead. The tragedy really affected our students, many of whom were victims of violence themselves. In response students at ACE's RUTH YouthBuild organized a Peace March in their community. Clockwise from upper left: 1.) Students, staff and community members marching for peace over violence; 2.) A student speaks to the crowd about how violence in the community had personally affected him; 3.) Another student speaks with a member of the press about the event; 4.) Students and staff take a moment of silence to honor the victim, Eduardo Rebolledo-Ramirez.

In November 2014, students and staff at Compton YouthBuild organized and hosted a "Community Palooza" to showcase options for young people in their community, including education, trade/culinary/​career options, pre-apprenticeships, workshops, leadership development and community organizations that are available to support and help them succeed in post-secondary life. The event helped the students become more involved and empowered as engaged leaders in their communities. Check out the video above for a recap of the event. 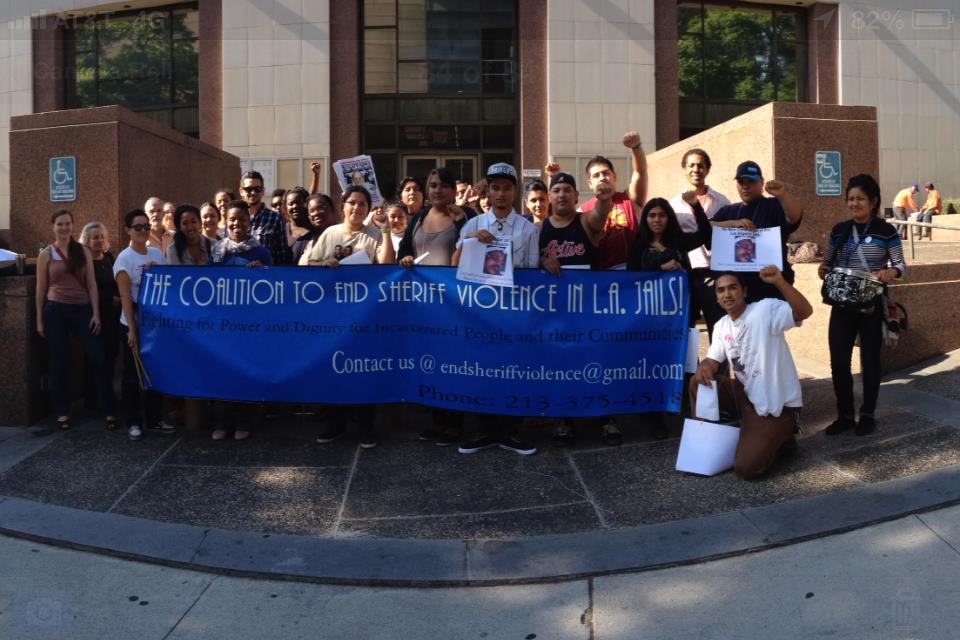 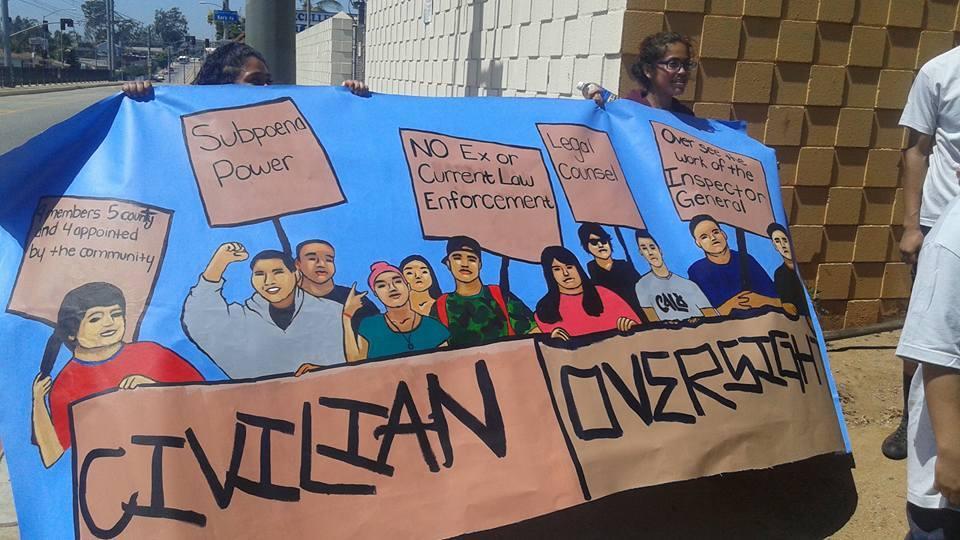 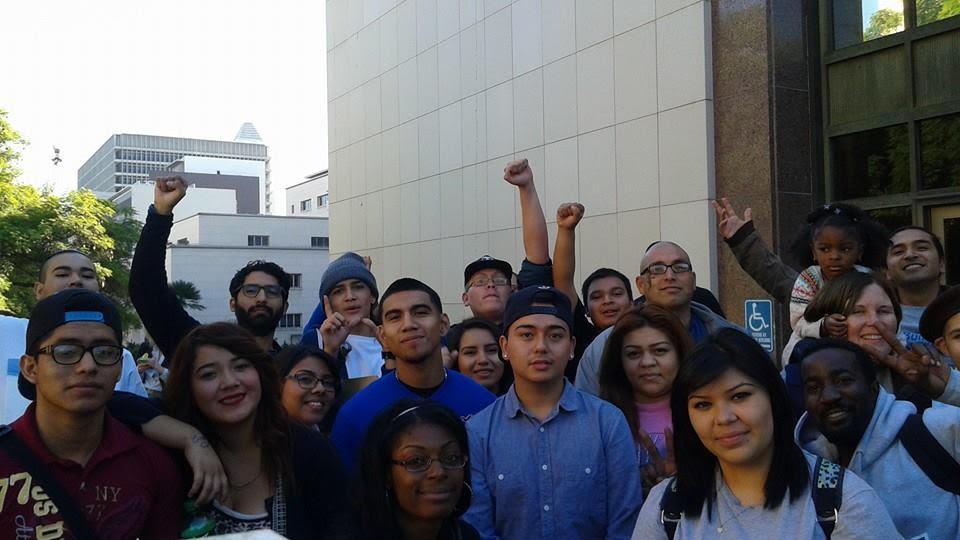 From 2012 - 2014, students and staff at CÁLO YouthBuild in Boyle Heights partnered with the Coalition to End Sheriff Violence in L.A. Jails to call attention to sheriff violence and advocate for civilian oversight in L.A. County jails. The students organized protests, phone banking campaigns, and teach-ins. In their classes, they created videos, banners, and radio broadcasts. They also wrote articles and presented to the LA County Board of Supervisors. In March of 2014, students worked with The Coalition to End Sheriff Violence in LA Jails, The League of Women's Voters and the ACLU to organize a Candidates Forum to inform the community about the candidates for L.A. County sheriff. The event provided an opportunity for our students and members of their community to learn about the candidates for LA Sheriff so that they could choose a candidate to help end corruption in the department. Clockwise from top: Boyle Heights students outside of the Kenneth Hahn Hall of Administration in 2013 protesting the use of sheriff violence in L.A. County jails. 2.) Students celebrate after a meeting at the Los Angeles County Board of Supervisors' Office during which the Board voted to approve the creation of a Civilian Review Board that would watch over the L.A. Sheriffs Department. The picture represents the culmination of over 2 years of organizing. 3.) Students marching through their community with a banner they created calling for civilian oversight. Click here to view a news clip from Noticias 62 (in Spanish) from one of their protests. 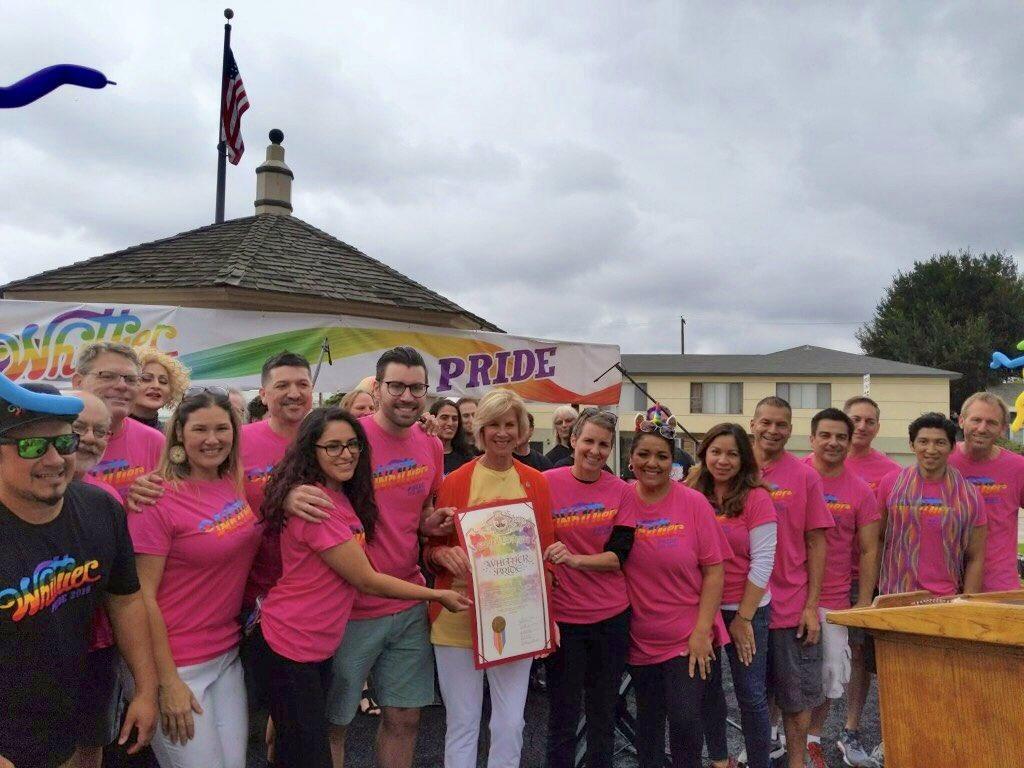 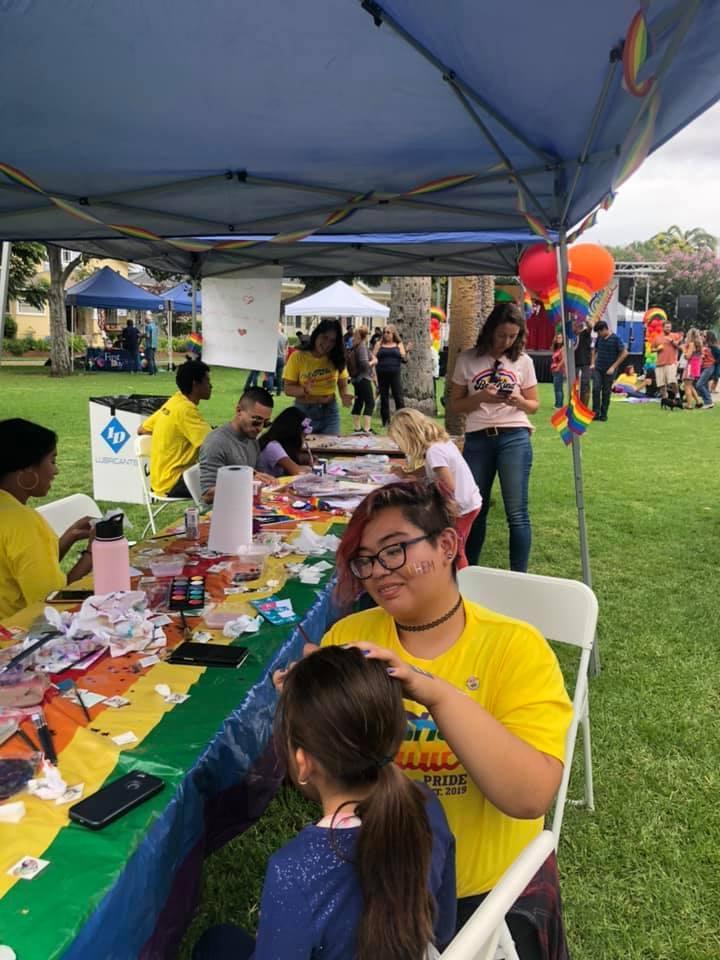 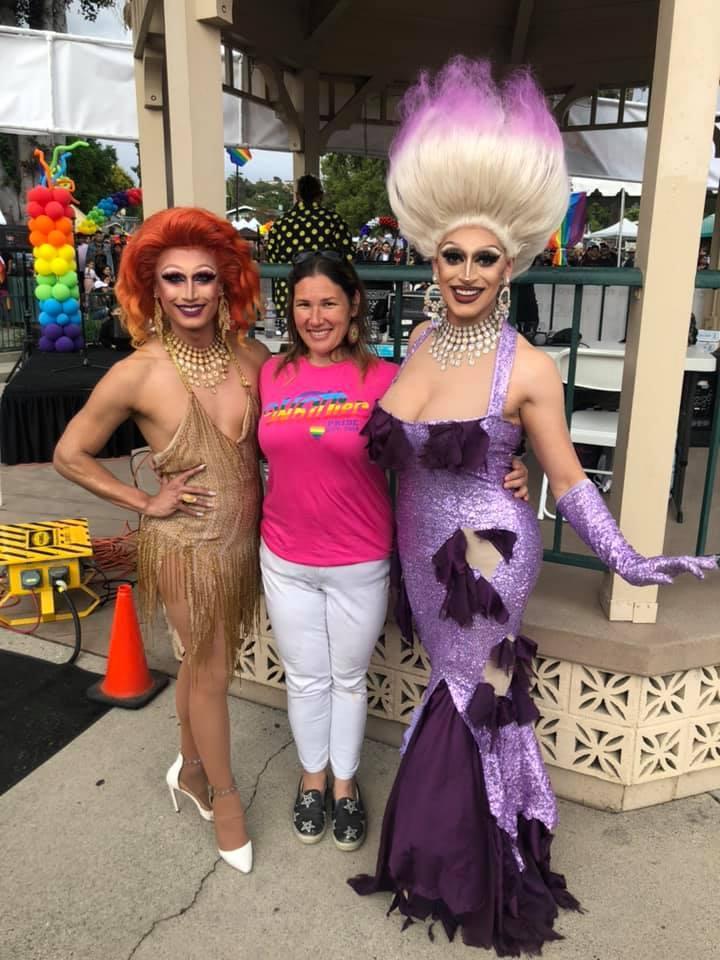 Whittier Pride was inspired by the LGBTQ+ students at Whittier YouthBuild who wanted to organize a youth-friendly and family-friendly pride event in their community. Sayaka Ponce, a teacher at YouthBuild Charter School of California's Whittier site and Executive Director of Whittier YouthBuild, worked with her students to organize the first-ever Whittier Pride Festival in 2019. Students initially proposed the idea of a "small family picnic," but the event then morphed into a full-scale "pride experience." They thought only about 1,000 people would show up, but over 5,000 turned out! You can read more about the festival in this fantastic write-up by the L.A. TACO. In 2020, due to the Covid-19 pandemic, Whittier Pride became "Whittier Pride Ride," a vehicle caravan through the city with prizes for the best decorated cars. Whittier Pride 2021 is scheduled for September 25, 2021. Click here to check out the official Whittier Pride website. Clockwise from top: 1.) Whittier Pride organizers with L.A. County Supervisor Janice Hahn; 2.) YouthBuild Charter School teacher and Whittier YouthBuild Executive Director Sayaka Ponce poses with drag queens at the event; 3.) Face painting booth at the event. 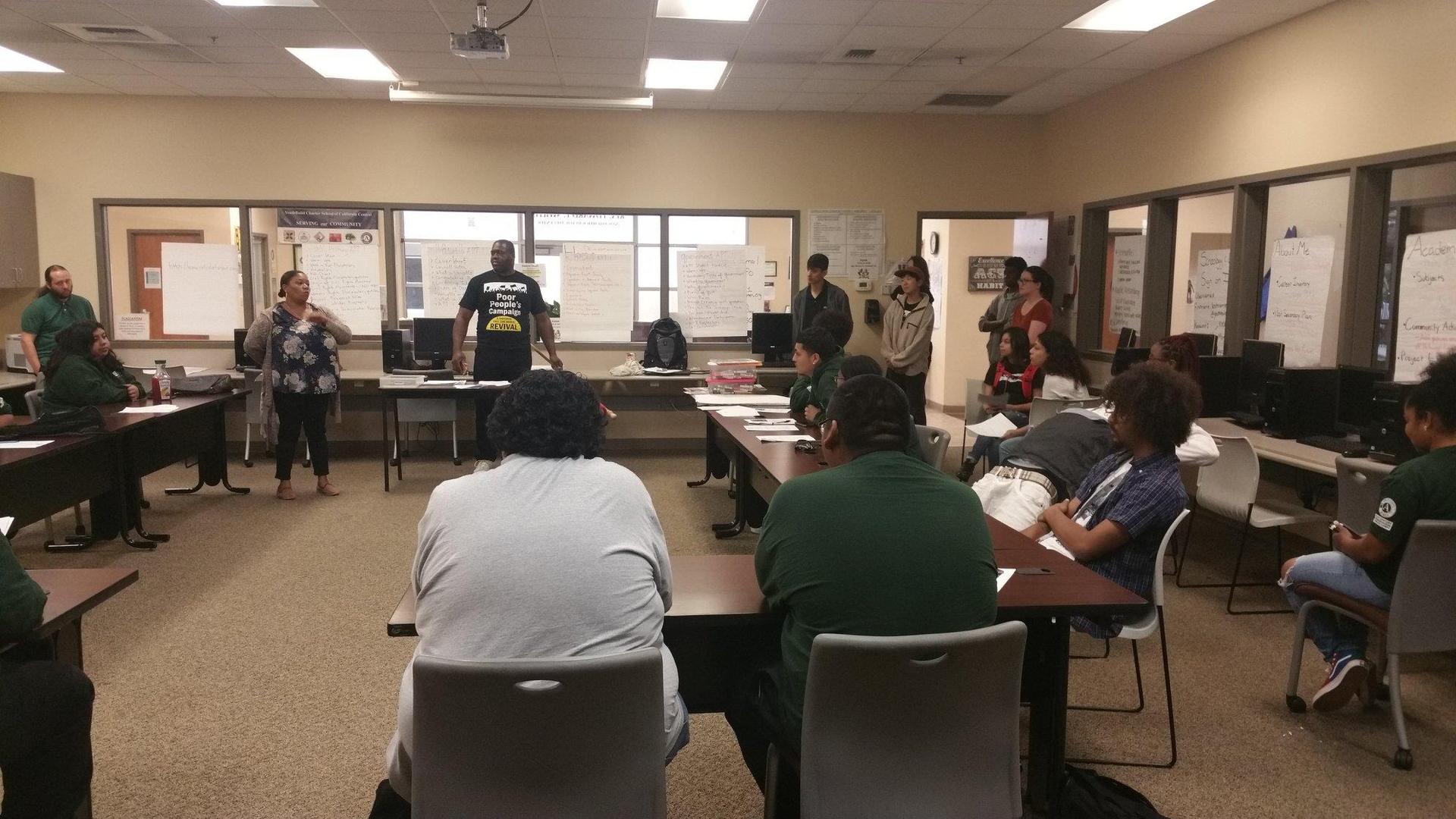 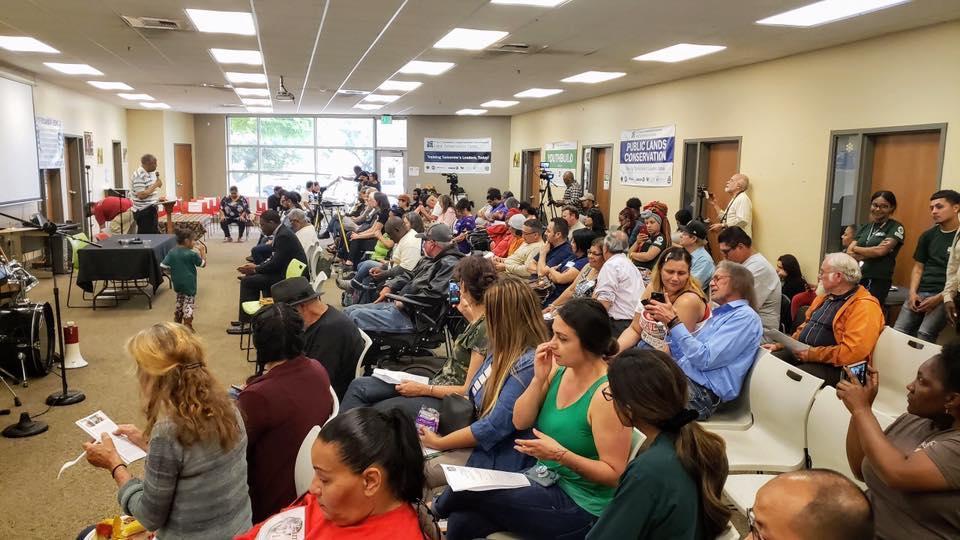 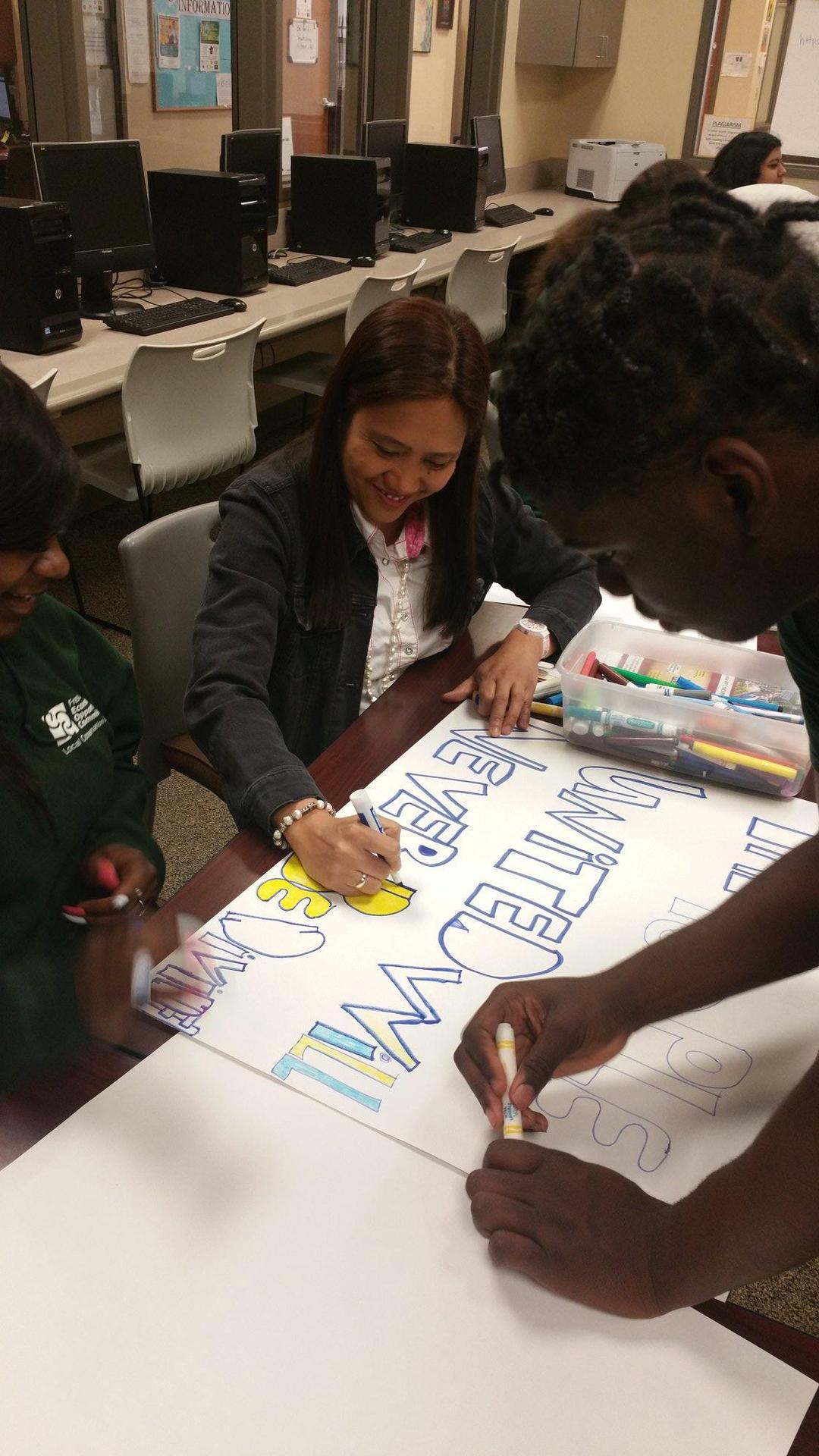 On April 8th, 2019, our Fresno students and staff helped host a Statewide Poor People's Campaign Hearing, which was followed by a rally and march through their community. There was a great turn out, and it was an amazing opportunity for our young people to represent as leaders and change-makers in their community. Click here to read more about and see additional footage from the event via the Fresno Bee. Clockwise from top left: 1.) Students, staff and community members march through the community; 2.) YouthBuild staff and representatives from the Poor People's Campaign prep students for the event; 3.) Students and staff make signs to carry while marching; 4.) The audience at the campaign hearing event. 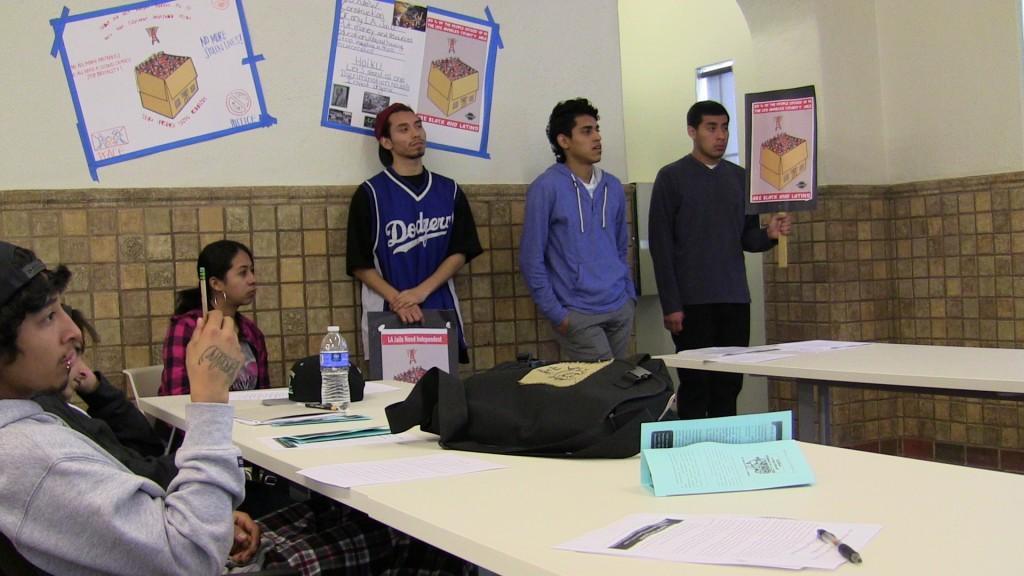 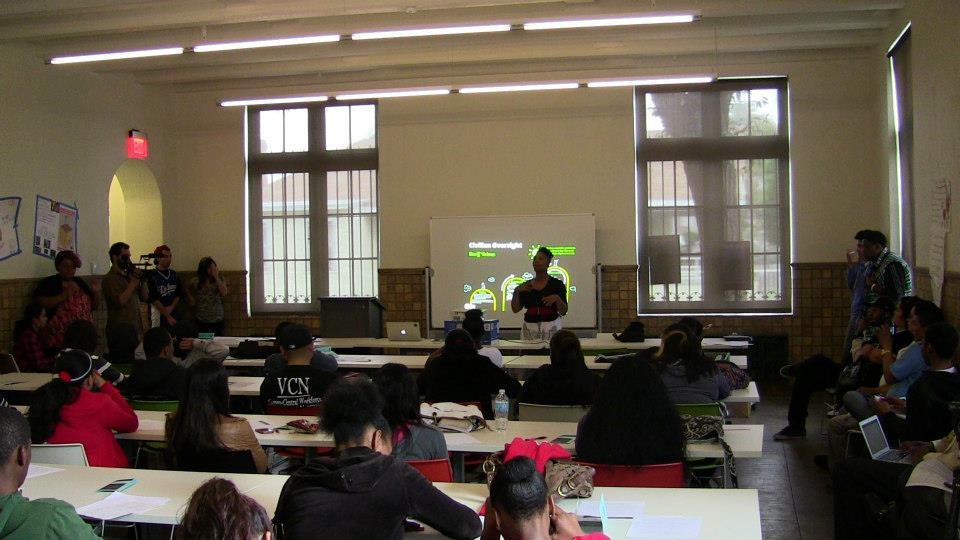 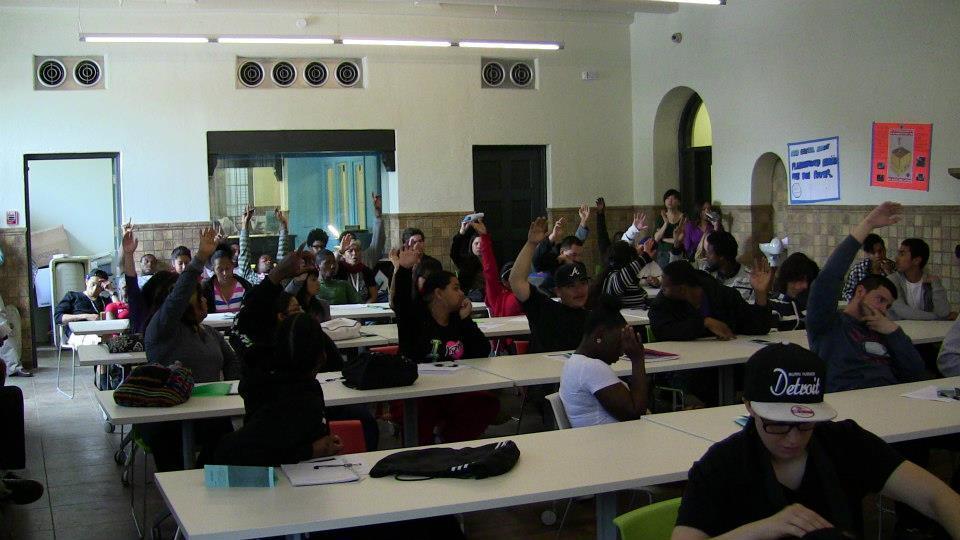 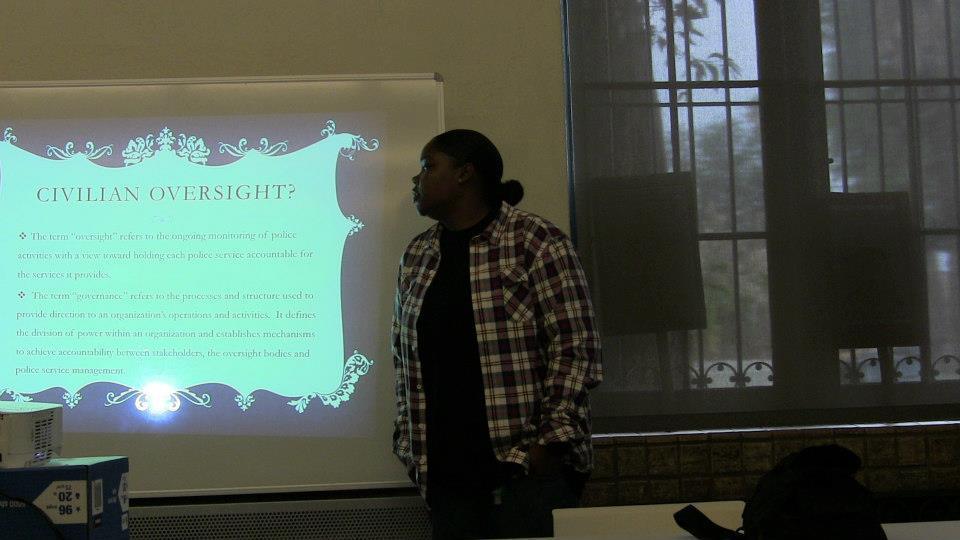 In 2013, students at our South L.A. site took part in Dignity and Power Now's Dandelion Rising Leadership Institute (DLRI), a leadership development program geared towards high school aged youth and led by formerly incarcerated organizers. Rooted in Dignity and Power Now’s project the Coalition to End Sheriff Violence, DLRI's youth members were encouraged to participate in strategizing and give public comment at Sheriff Civilian Oversight Commission meetings. As part of these efforts, students hosted a town hall style "Teach-In" event at the 28th Street YMCA (now the Vernon-Central Network YouthSource Center) to talk to their fellow students and community members about how sheriff violence in L.A. County jails had personally affected them and to advocate for civilian oversight. Clockwise from the top left: 1.) Students listening to presenters during the teach-in; 2.) Dignity and Power Now's Patrisse Cullors talking to students and community members about the need for a civilian oversight commission; 3.) A South L.A. student explaining civilian oversight to the group; 4.) Students and community members raise their hands when asked if sheriff violence has impacted them.

Other Projects and Events: 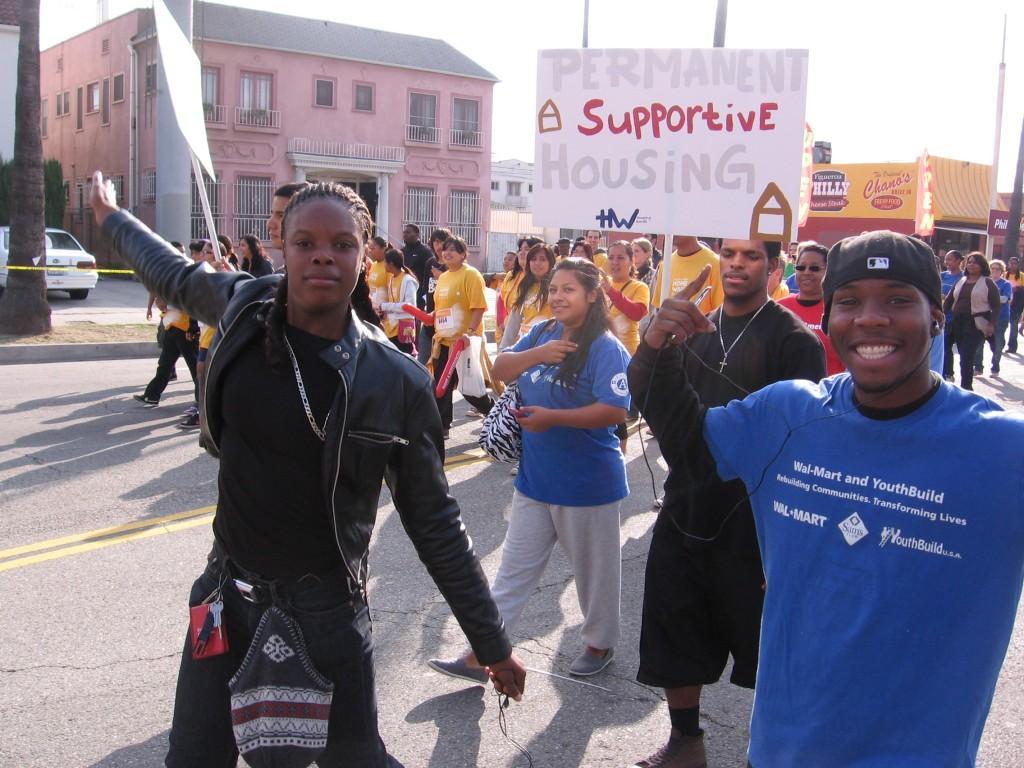 Lennox students participated in United Way’s Homewalk in 2013 to raise awareness about homelessness in their community and the importance of permanent supportive housing. 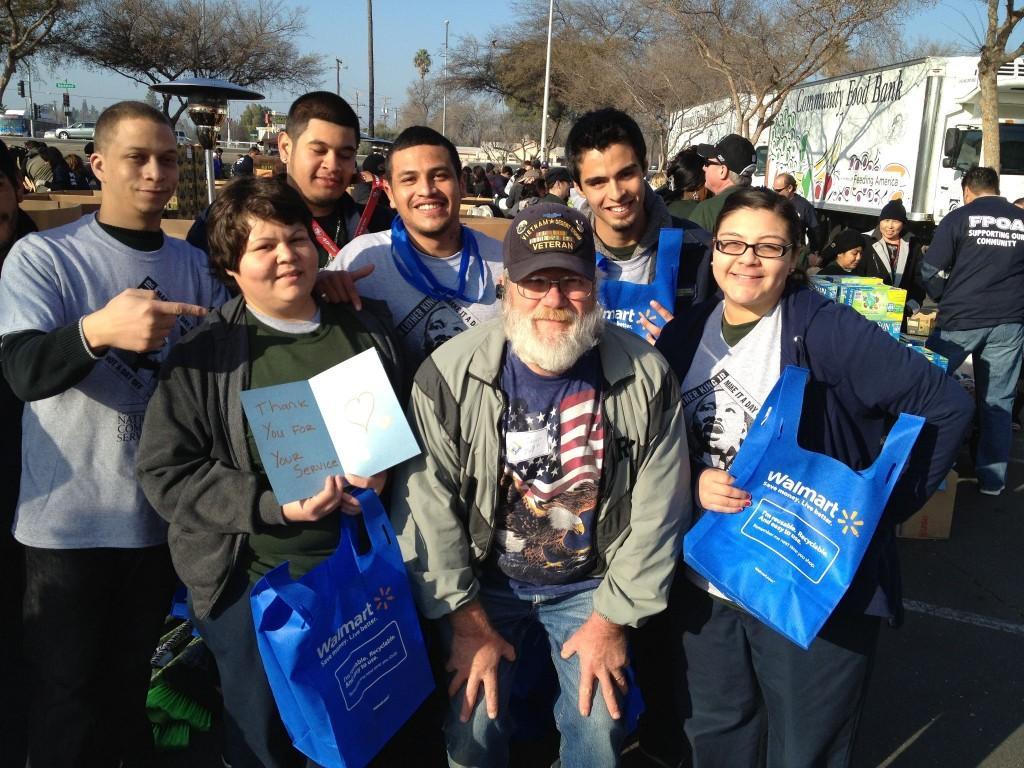 Fresno students marched in downtown Fresno in 2013 to mark the Rev. Martin Luther King Jr. Day of Service and raise concerns about such things as poverty, education inequality, support for veterans, outsourcing jobs and bad drinking water in some parts of the Valley. Working with the nonprofit HandsOn Central California, they helped distribute over 40,000 pounds of food and cleaning supplies to 820 local families.

Norwalk students at our Field of Dreams Learning site out rocking the vote for the 2012 presidential election at Taste of Soul in Crenshaw. 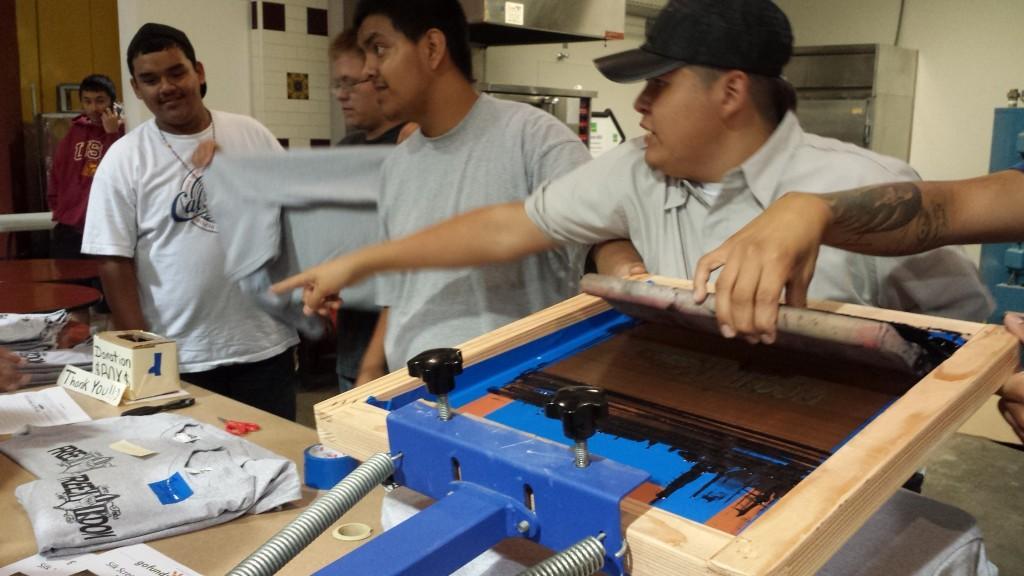 Students from our Boyle Heights site made and sold t-shirts promoting jobs, not jails at a Candidates Forum to inform the community about the candidates for LA County sheriff. 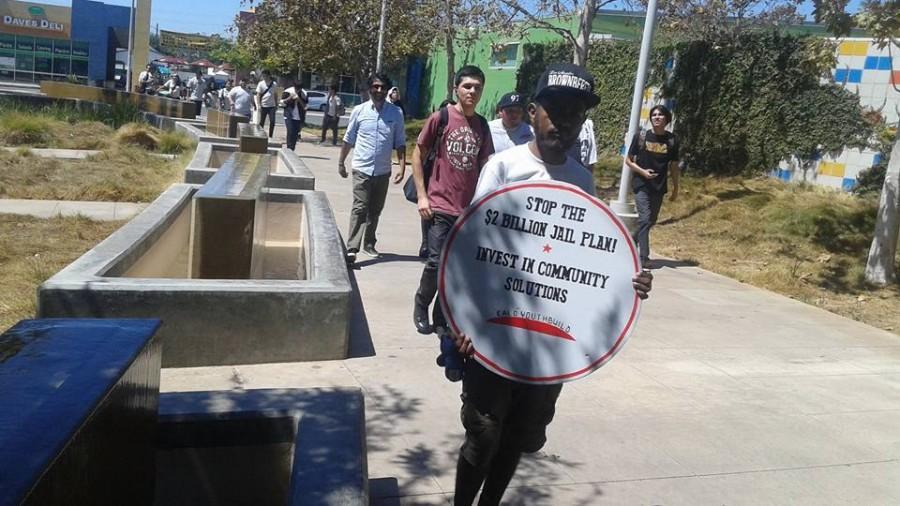 Students from Boyle Heights marched to County Supervisor Hilda Solis’ Office, asking her to 1.) Split the vote and vote on jail spending separate from diversion, 2.) Build no new jails in LA County, and 3.) Support the 1% Campaign: to divert 1% of the law enforcement budget to youth centers and peace-keepers. 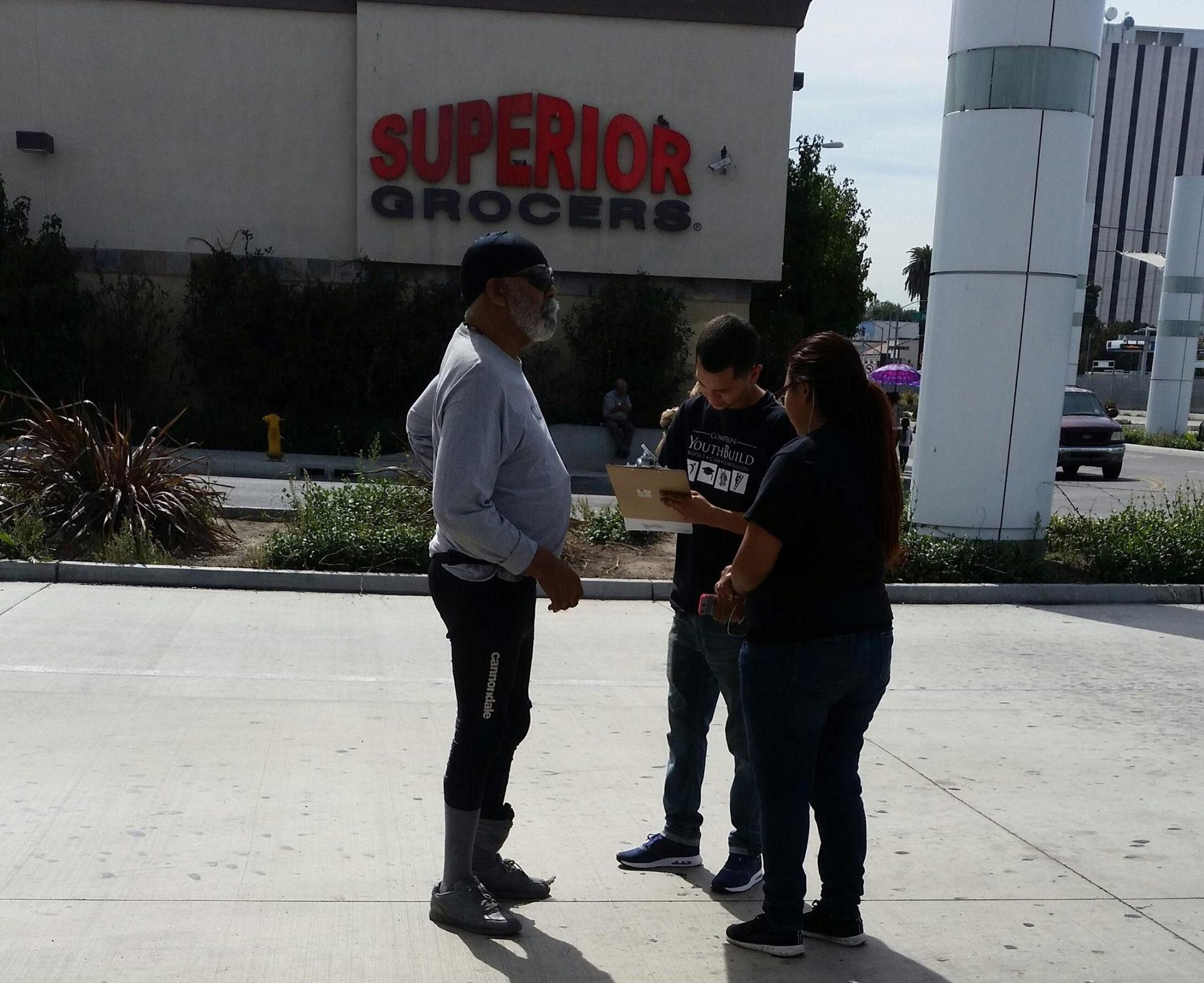 Compton students help community members register to vote as part of a voter registration drive in 2016.