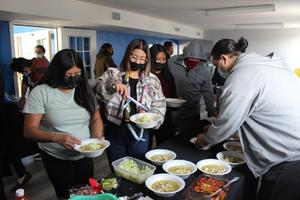 Our East LA site at LA CAUSA YouthBuild held their annual Posada celebration on Wednesday, December 8th. Students, staff and alumni gathered for delicious food, games, gifts, and awards.
We had a blast at LA CAUSA YouthBuild celebrating the holiday season in East LA at their annual Posada event. For those who don't know, Las Posadas are a Mexican Christmas tradition that celebrate the days leading up to Noche Buena (Christmas Eve.) As part of the Christmas celebration, posadas (literally translated to "inns," in recognition of the pilgrimage to Bethlehem by Mary and Joseph in search of a room) are held for family, friends, and neighbors from December 16th through December 24th (since we will be on Winter Break next week, they
held theirs early.)
The event featured lots of delicious food, fun games and raffle prizes, and a celebration of students and December graduates. Counselor Francisco Hernandez made a delicious salsa to serve with nachos and LA CAUSA YouthBuild Executive Director Virginia Reyes made enchiladas and her famous pozole (which is so tasty it draws alumni back to LA CAUSA's Posada events after they've graduated.) There were also plenty of donuts and sweet treats. Everyone got a raffle ticket, and there were a number of prizes, including advent calendars, flavored popcorns, chocolates, and even a mattress donated by Costco thanks to a LA CAUSA student who works there. There were also plenty of fun and games. Students and alumni were excited to play a LA CAUSA themed version of lotería, dubbed "LA CAUSAría." The lotería cards featured images of LA CAUSA teachers and staff and references to things well known to the students, like restorative justice circles, ELAC dual enrollment, construction, and community service. There was another game where students had to try to unwrap a tightly plastic wrapped gift using oven mitts before the music stopped and they had to pass it to the next student. The celebration ended with the students smashing two piñatas, one in the shape of a giant star ornament and the other that looked like the Grinch, before posing for a group photo. Shout out to the entire team at LA CAUSA YouthBuild for all the work they put into this event! You can check out more photos below or on our Facebook page.