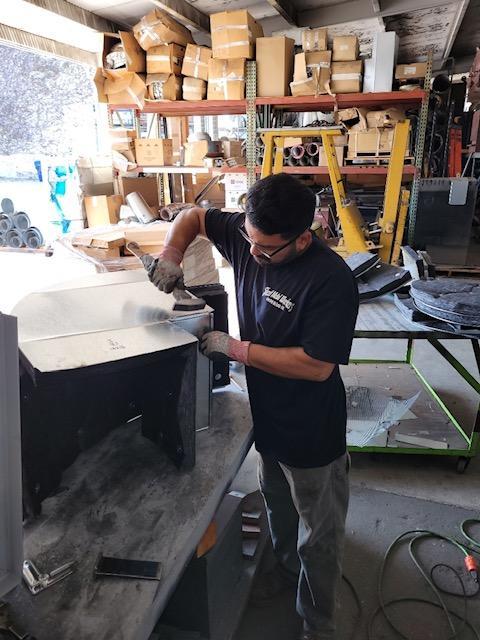 Luis Rivera graduated from YouthBuild Charter School of California's former Lincoln Heights site at LEAD YouthBuild in 2015, but it was participating in the YouthBuild Construction Academy’s Annual Build-Off Event in 2016 that got him excited about construction. The path to apprenticeship began because of the outdoor construction activities that the Academy offered. Intertwined with learning the MC3 (Multi-Craft Core Curriculum) curriculum, students built free library borrow boxes for their community.

Six months after he graduated from YCSC, Luis entered the registered union apprenticeship program for the Floor Layers Local Union 1247, which is a part of the Painters and Allied Trades District Council 36. Beginning then at $14.00 per hour with benefits, Luis worked Monday through Friday and attended classes on Saturday.

It paid off in a big way when Luis became a Journeyman this past May. Luis spoke about how tough those years were but how the learning was tremendous. Classroom education on Saturdays complimented the hands-on work he did in the field all week long.  Any extra funds he had from paychecks would go toward buying tools.  Support came from his family, girlfriend and YouthBuild.

In order to give back, Luis would return to the program in an alumni capacity to speak to the current students and encourage them. “That was pretty fun,” he says.  As in any union program, Luis stays on their active list while he is working a job or when he needs a new one. Or, he may seek out new union shop work on his own.

In the future, Luis would like to begin his own company. “YouthBuild and the apprenticeship made me a better person," Luis said. "The job and the education worked in tandem, but the space was safe. I could screw-up and keep trying."

Luis wanted to share the following advice for other YouthBuild alumni who are considering apprenticeships: John Paul Ruiz has a similar story.  Even though his route to the apprenticeship took a different path, it still ended him in a position that pays well, has benefits, and will serve him for a lifetime. A 2012 graduate of YouthBuild Charter's El Monte site at the San Gabriel Valley Conservation Corps YouthBuild program, John Paul worked in retail at Old Navy after graduation. He later joined the army, specializing in HVAC. In 2020, with the support of Ben Garcia of the Los Angeles/Orange County Building and Construction Trades Council AFL-CIO, John Paul entered the Sheet Metal Workers Local 105. He has always liked working with his hands and this really checked that box.

John Paul credits the ongoing mentorship role that Ben played with his success. "It is challenging in a given week to learn on the job, learn in class and then study in your free time." In addition to Ben, he credits his family, friends and girlfriend with continuing the journey. “Reaching Journeyman status is going to be super-helpful,” John Paul said.  For any individual considering an apprenticeship, John Paul offers this list: